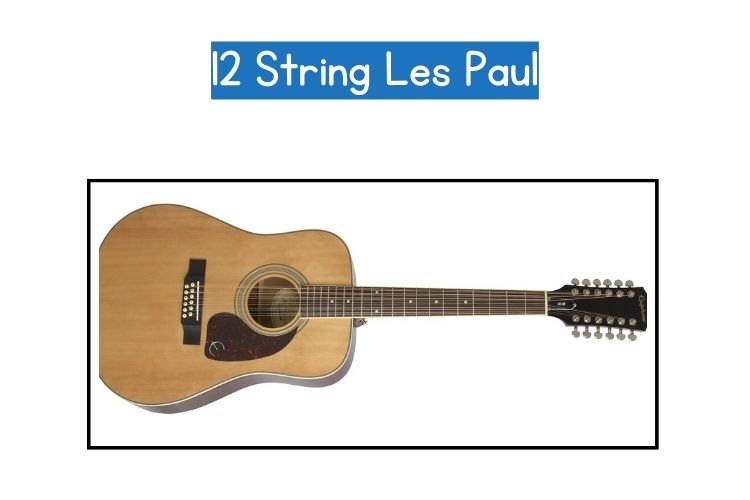 Perhaps one of the master creators when it comes to guitars is Gibson. They know exactly what their audience wants, and the delivery is always spot on.

The specifications, aesthetics, and other features are always top-notch, making the Gibson guitars worth every penny.

However, since so many models are available, how do you decide which one you want? One of their most brilliant releases, the 12 String Les Paul, is a great choice.

However, is a 12-string worth it? Another question you might ask yourself is, is it harder to play 12-string? Why can’t you play the traditional guitars with lesser strings? What is the advantage of a 12-string guitar?

Another dilemma is that if your eyes are set on the 12 String Les Paul, where is the 12-string Les Paul for sale?

You can easily find several Les Paul guitars for sale in your local commercial markets without having to look around much. After all, who wouldn’t want to keep models as good as the 12-string Les Paul or 12-string electric guitar?

The 12 String Les Paul guitar is one of a kind. It showcases a new old stock (NOS) maple neck that is reminiscent of the late 1970s. It also has a rosewood fretboard, proudly boasting the Les Paul guitars from the early 1980s.

The 12 String Les Paul guitar’s caps and pots are dated back to 1978, and the guitar comes with a white alpine finish overall. You won’t just find this beauty everywhere; however, it is available at most large, well-reputed guitar stores.

Gibson and 12 Strings Guitars- A Legend

It is not news that Gibson has come up with the stellar 12 String Les Paul guitar. Gibson is known for creating glorious and premium-quality 12-string electric guitars.

It has now merged its 12-string expertise with the electric guitar variety and has launched perhaps one of the most powerful and best-playing guitar breeds ever created, the 12 String Les Paul.

The 12 String Les Paul guitar is not just an ordinary guitar as it is equipped with all the features you would want in a traditional and popular Les Paul, including the stunning tonewoods, sensational humbucking pickups, excellent hardware complements, and minor modifications that are fit for contemporary as well as classical music.

In addition, the 12 String Les Paul guitar is available in three of the most famous Les Paul finishes, Gold-top, Ebony black, and Heritage cherry sunburst.

All the shades have the characteristic high-gloss nitrocellulose lacquer, which is further enhanced by the classic vintage-cream binding, gold speed knobs, and pickguard.

As you would expect from the finest Les Paul beauties, the 12 String Les Paul guitar has a body made of a lovely mahogany shade, weighs just right, minimizing the player’s discomfort, and is capped with a carved maple top.

The 12 String Les Paul guitar’s neck is something to boast as it is carved to form a lovely ’60s profile, measuring 0.8 inches deep at the 1st fret and 0.875 inches from the 12th.

The neck also boasts a Grade-A rosewood fingerboard that has 22 medium-jumbo frets along with traditional-style acrylic trapezoid inlays.

Gibson ensures not to cramp your style with the 12 String Les Paul guitar as it accommodates six extra strings by leaving out some real estate on the fretboard.

Gibson has extended the PLEK-cut Corian nut’s width to 1.750 inches, allowing you to play and look fabulous without worry.

Moreover, the extended headstock is a tribute to the Les Paul guitars, as all the models carry this style. Most have the mother-of-pearl Gibson inlay along with the gold “Les Paul Model” silkscreen that comes with a truss-rod cover saying ‘Traditional.’

It has a ’57 classic neck position along with a ’57 classic plus within the bridge. Together, they form a pleasant chime, brilliant leads, and melodic in-between tones. You can get all of this at the flick of a three-way switch.

With the 12 String Les Paul guitar, you will feel more glory and guts, unlike you have felt with any other 12-string guitar.

Both pickups that come with the 12 String Les Paul guitar are made keeping Gibson’s legendary PAF humbuckers, with the 42 AWG wire and Alnico 2 magnets.

The 12 String Les Paul guitar also has extra turns along the bridge pickup coils that add gusto and grind to the beat.

The 12 String Les Paul guitar also features a stop-bar tailpiece and a tune-o-Matic bridge, both modified for the classical 12 String guitar.

They form a firm hold and act as anchors for higher sustainability of beat, intonation adjustment, and resonance.

Here is a quick review of the 12 String Les Paul Guitar with all its features and details:

The 2000 Epiphone Les Paul 12 strings guitar is an excellent choice for anyone who wants a powerful and aesthetic instrument.

The most popular model comes with a mahogany neck and body, flamed maple top, trapezoid inlays, and rosewood fretboard.

Is it harder to play 12-string?

Most guitar players think it is harder to play a 12-string guitar, regardless of whether it is electric or acoustic, compared to a 6-strings guitar.

To develop full control of a 12-string guitar, the player must learn the extent of stretch in the strings and be able to manage the neck’s width and thickness.

What is the advantage of a 12-string guitar?

Both 6 and 12 strings guitars can play tunes very well. However, the latter will help you find the perfect tone and space needed in a modified acoustic instrument.

Once fingerpicked, the 12 strings guitar produces a warm sound that your audience will enjoy thoroughly. Furthermore, it brings in extra power when strummed with significant resonation.

Who is famous for playing a 12-string guitar?

While several great artists have played a 12-string guitar, Roger McGuinn, born in 1942 and the leader of The Byrds, is highly famous for playing it.

Roger McGuinn has significantly promoted the 12-string guitar with his famous songs with The Byrds. He recorded most of these either on an acoustic or electric 12-string guitar.

While most of the general specifications, such as the tonewoods and looks, are similar to 12 strings and six strings guitar, the number of strings and their stretch is different.

You may also notice that the 12-string guitar is more versatile and allows you to play more tunes than a 6-strings guitar.

You can play similar tunes with a 6 and 12 strings guitar, but the latter will give out a richer, more beautiful sound that is harder to get from a six strings guitar.

With a 12 strings guitar, such as the 12-string Les Paul, you get a fuller effect that transforms just about any genre or song into a memorable one.