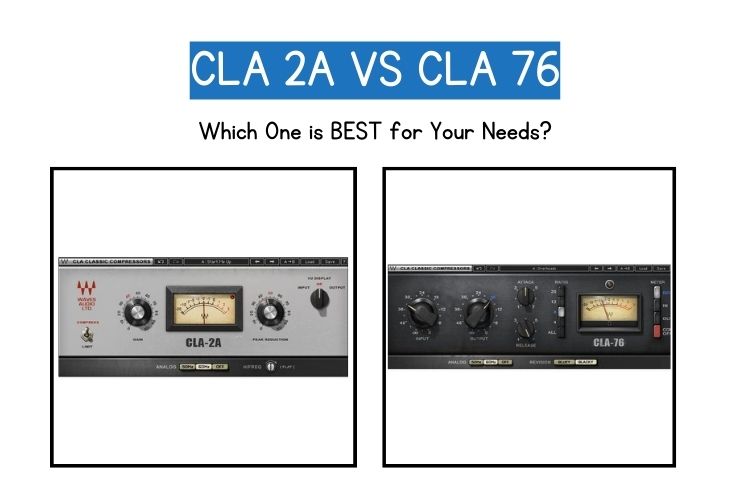 You’re probably sitting in your home studio or an actual recording studio and wondering if you should get a digital compressor instead of hefty and bulky hardware compressors.

Let us help you with which Digital Compressor you should get for a banger of a song that you want to produce. We’ll do this analysis for you and give you a slight idea about CLA compressors.

These are the four models of CLA Compressors:

The CLA-2A, which is based on the legendary electro-optical tube compressor, replicates the smooth, frequency-dependent behaviors that have made the original such a favorite among engineers worldwide.

The CLA-2A performs admirably on guitars, bass, and vocals, much like the mid-’60s classic. A model that transcends its inspiration can be created by adding Chris Lord-custom Alge’s presets and seemingly endless instantiations.

This compressor was well-liked when it first came out because of how transparent it operated and how little harmonic distortion it had.

Naturally, harmonic distortion is a sought-after character fault in today’s digital environment and is far more obvious than it formerly was.

Like the original, the CLA-2A provides a slow attack time and a fairly transparent compression curve (about 3:1). (Around 10ms). When driven forcefully, it provides warmth and even a faintly edgy distortion.

Vocals and other materials requiring post-transient adjustment naturally lend themselves extremely well to the 2A.

The CLA-3A gives the quick response and the little harmonic distortion for which the original solid-state unit from the early 1970s is renowned across the world. It is based on that device.

Extra regard should be paid to the high-frequency control, which modifies how the compressor reacts to specific frequencies.

When set to “flat,” the compressor equally reduces gain across all frequencies. Gain reduction is applied to frequencies below 1 kHz less and less as the control screw is cranked counterclockwise.

This is highly helpful when there is a lot of low-end air in a vocal that doesn’t need to be filtered away but impacts when and how hard the compressor attacks.

It is also helpful when there is a lot of low-end air in a vocal that affects the way upper frequencies are compressed.

Despite having a comparatively quick attack time of 1.5ms and not having a variable attack and release time, the CLA-3A cannot match the CLA-76’s lightning-fast attack.

It operates incredibly clearly and is ideal for instruments like electric guitars and vocalists.

However, drums have always been my preferred use for this kind of compressor.

It seems to have the ideal inherent attack and release time for them, and when used, it immediately gives you a great-sounding, subtly exaggerated slap and lower mid-range thud.

Once more, the CLA-3A does an excellent job of simulating the hardware unit, offering a light harmonic distortion and a good, smooth compression. In my most recent mixes, I frequently tap the tops of the snare drum.

The user must choose which option suits a particular circumstance best in light of the aforementioned distinctions.

Simply because of the attitude it conveys, I have more frequently found myself drawn to employing the Bluey version of the plug.

Radical changes to the resulting sound may be easily achieved with very slight input level adjustments. Inserting this plug on a lead vocal or drum room mic and activating the “all” button instantly produces an explosive and in-your-face quality that is at once familiar and highly exciting.

Conversely, you can reduce the gain and back the ratio to achieve a more subdued result.

Although this is obviously what one would expect from a compressor, I was surprised by how melodious it was and how many distinct colors could be achieved in such a blatant manner.

Bass guitar is a nice example of a case where one might want to utilize a reasonable level of compression without adding too much fuzz or losing the low end to the signal, and I found Blacky to be a little more effective in those circumstances.

Blacky offers a noticeable compression effect without sacrificing a clean sound and completely removing any dynamics of the source if used on piano and vocals.

Levels of distortion and noise make the main differences between the two compressors the easiest to distinguish.

When the analog section is activated, “Bluey” hisses less than “Blackie” but distorts more readily than its counterpart. On the other hand, the 50–60 Hz hum is barely detectable in “Blacky.”

I should point out that this hum emulation is pretty subtle in both circumstances, and you wouldn’t find it annoying if you decided to keep the analog portion activated.

Like their hardware counterparts, these compressors have extremely quick attack times (the slowest option is 1 ms, and the fastest is up to 50 microseconds).

As a result, they are well suited for content where a more aggressive approach to managing dynamic range is required.

What is CLA-2A good for?

CLA 2A has a softer tone to it; it has a quick attack speed. It is amazing for Vocals, bass, and Guitars. The CLA-2A offers a slow attack time and a very transparent compression curve, just like the original (about 3:1).

It produces warmth and even a slight edgy distortion when driven hard. The 2A naturally lends itself incredibly well to vocals and other elements requiring post-transient adjustment.

Let me briefly give a review of CLA-76 after vast research on compressors.

It provides a solid impact for the guitars and vocals. I would strongly advise it to anyone wishing to add more 1176 emulators to their collection or who wants a high-quality 1176 emulator.

It takes some getting accustomed to CLA-76. The results are good, but it takes some time to explore its behavior. It is a compressor that is quite forceful.

But if you can adjust its settings and learn how it reacts to your recordings, it can provide some pleasing outcomes.

I’m not sure if it can take the place of the stock DAW compressors, but it excels at what it does. It is one of the few plug-ins that is believed to sound fantastic on practically everything, including drums, guitars, and vocals.

If we compare CLA-2A and CLA-76 depending on their output with vocals, then we can’t compare them head to head.

Furthermore, the CLA-2A and CLA-76 function well together. Numerous engineers are aware of the benefits of connecting two compressors in series, whether it be to make use of the special characteristics of the two compressors or to create softer compression effects by setting each for very modest compression.

Use the CLA-2A to add a little smoothness and warmth to your vocals. To give them extra punch in a mix, compress it later with a CLA-76. Before adding warmth to CLA-2A, some people use CLA-76 to tame their vocals.

How do the Waves CLA-76 hold up in modern times?

Again, we can’t say if it is the best or not. It has its Pros and Cons.

CLA-76 is a member of the CLA Classic Compressors series as well. This compressor is special in that its attack, release, and ratio features are all program-dependent.

It compresses or limits according to the chosen ratio, but after the initial transient, it intensifies compression in a way that depends on the program material.

It can be tuned as a useful gain reduction tool or, on the other hand, as a tone-shredding beast that sounds aggressive and spitty on vocals, vivid on guitars, and fantastic on drums.

For smashing a drum bus or anything else you want to mangle, use the renowned “all buttons in” mode (labeled ALL on CLA-76).

This model has a severe compression curve, an overdriven tone, and a delay in grasping the first attack.

The CLA-76 has a basic but comprehensive control set that includes pushbuttons for ratio and metering options, an input pot to regulate compression level, attack and release knobs, and an output pot.

As a version of the iconic 1176, CLA-76 sounds fantastic and has rapidly established itself as a must-have plug-in.

You would believe that these plug-ins had a lot of attitude and vibe, even if you were unaware of the history of the original hardware or the fact that the graphics and controls were set up differently.

The defaults on CLA-76 are nice places to start. Everywhere you utilize the plug-in, you’ll find it to be useful and additive.

It’s fun with several vocal possibilities, it’s wonderful for giving a kick drum a lot of meat and clarity, it helps guitars express themselves better in the mix, and the list goes on.

The CLA-76’s Bluey and Blackie are both straightforward, excellent tools that get the job done and add something unique to the song.

Determining whether you primarily require a compressor for slow, relatively natural leveling (2A) or a more grabby, “energetic” form of compression to either provide some more energy or crush transients is necessary (76).

The Waves CLA76 was a nice 1176 compressor when it was released about ten years ago, but there are currently a ton of better options available if you want one. A murky and diminutive compressor, the CLA.

Although that is THE common issue with modeled plug-ins, this one sounds smaller than most.

It reduces the low end. However, if you must use the CLA76 instead of one of the better choices, make sure you at least have the means to run it two times, oversampling to get it to open up a little and minimize the aliasing that contributes to the plug-in’s muddy sound.

Put a clipper or limiter after it for a more accurate simulation because it allows peaks to pass even at the quickest setting in a way that the hardware doesn’t.

The CLA-2A plug-in has a better sound. Once more, oversample it (exactly twice this time; any more will actually harm the sound), and you’ll have a nice-behaving plug-in overall (again, not great at retaining low end, but overall a pretty useful plug-in).

What compressor Should we get?

Can we use different compressors together?

Music engineers prefer using Multiple Compressors for a different kind of touch. A lot of sound engineers use CLA-2A and CLA-76 together.

Is CLA the only go-to Compressor Plug-in?

Even though the CLA line is amazing, Waves have other Compressor brands, which are very well known, used worldwide, and might sound better.

The seamless, frequency-dependent characteristics that have made the original a delight of experts worldwide are replicated by the CLA-2A. The CLA-2A performs admirably on guitars, bass, and vocals, much like the mid-’60s classic.

Simply said, CLA 76 is a fantastic compressor that is frequently employed, particularly on guitars and vocals. We would strongly advise it to anyone wishing to add more 1176 emulators to their collection or who wants a high-quality 1176 emulator.