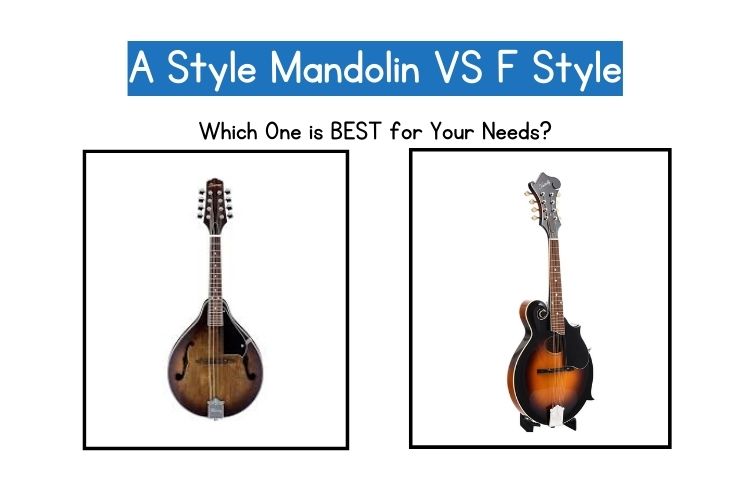 Mandolins have been around for centuries. Apart from movies, you will also see them in ancient drawings and even read their mentions in poetry. The Mandolin has been among the favorite instruments of several old and modern musicians.

The Mandolin is a member of the Lute family, but its shape has evolved to fit modern times.

Often played in Europe, the Mandolin disappeared for a while after the Napoleonic wars. In plain terms, it is a stringed musical instrument that is plucked with a plectrum mostly.

Several styles of Mandolin exist, including A-style and F-style. If you are planning on getting one or replacing your old one with a new one, have you wondered what the difference between the A-style Mandolin and F-style Mandolin is?

Or, is the A-body or F-body a better choice for getting a mandolin? There are numerous pros and cons of using an A-style and F-style mandolin.

Some musicians prefer the A-body, while others opt for the F-style. Undoubtedly, deciding between the two can be quite tricky. But do not fret because we are here to make things easier for you.

A prominent member of the Lute family, mandolins mostly have four courses of double metal strings, which are tuned in unison. Therefore, they have a total of 8 strings, but 10 and 12 strings variants also exist.

The courses are normally tuned in intervals of perfect fives and have the same tuning as violins, such as the D-4, G-3, E-5, and A-4.

Mandolins are also considered members of the soprano family, which includes the octave mandolin, mandola, mandobass, and mandocello.

The most common mandolin styles are the round-backed or Neapolitan Mandolin, the flat-backed Mandolin, and the archtop mandolin. The round-backed variant comes with strips of wood glued into a bowl and a deep bottom.

The archtop, sometimes referred to as the carved-top Mandolin, logically has an arched top along with a shallow, arched back, both carved from wood.

The flat-backed Mandolin utilizes thin wooden sheets for the body that are braced on the insides. They offer strength similar to a guitar.

The archtop instruments are famous for bluegrass and folk music in America. The flat-backed instruments work better for British, Brazilian, Irish, and Mexican music.

Although other mandolin versions also exist, the three discussed above are among the most popular.

The variants have different numbers of strings, such as the four-stringed Cremonese and Brescian, six-stringed mandolins like the Milanese, Sicilian, and Lombard, and the 12-string Genoese.

Much of the Mandolin’s development revolves around its body and the number of strings. The earlier instruments were quieter, played with getting strings and plucked with a quill or fingers.

On the other hand, the contemporary variants are louder since they use metal strings.

A typical mandolin’s soundboard mostly has one or more sound holes. The soundboard is also made to withstand more pressure and comes in many shapes, such as a teardrop or other projections.

The sound holes are either oval, round, or have a calligraphic f-shape. For an aesthetic effect, you may also see decorative purling or rosettes on the sound holes.

Difference Between A-style and F-style Mandolin

Now that we are well aware of what a mandolin is and its history, let’s talk a bit about its famous body shapes and why one is better or the same as the other one. The most common body shapes you will come across are A and F-style.

The primary difference between the A-shape and F-shape is the ornamental scrolls.

On the F-style body, you will see an ornamental scroll present on the headstock, along with two points on its lower body. The A-style, on the other hand, has no such features.

When you compare both these styles, the F-style Mandolin is pear-shaped. It looks somewhat plain, simple, and understated, making it fit for just about any recording session or band virtually.

The sound is also excellent when it plays by itself. Pasquale Vinaccia mainly modernized the F-style Mandolin in the year 1835. The fingerboard was extended to 17 frets.

After the introduction of the modern version of the Mandolin, luthiers like Luigi Emberger and Raffaele Calace modernized it further. You can see their initial instrument displays in Venice’s Music Museum.

This led to most musicians playing only the Roman or Neapolitan styles for a brief period.

The Roman and Neapolitan styles are more towards the A-style Mandolin since they comprise a pear-shaped body.

However, the former is broader and more profound than the latter, meaning it will give rise to warmer notes that attenuate pretty well with the bass frequencies.

The Roman style also uses ornate designs. The Roman-style mandolins are often compared with the Neapolitan mandolins, like the acoustic and classic guitars are compared today.

For the first impression, both the A-style and F-style mandolins sound very similar, and the difference only seems to exist in the appearances.

However, when you notice more closely, you will realize that the F-style sounds warmer, has a more ancient-like design, and is more widely used among classical music lovers.

The Main Differences: A-Style Vs. F-Style

When comparing the cost difference between the A-style and F-style Mandolin, you will see that the latter costs a lot more in most cases.

If you are only starting out as an artist, getting entry-level kits with a mandolin, strings, gig bag, tuner, and a capo is a good option.

The scroll, points, and headstock make the F-style Mandolin pricier. They make these models 50% – 70% more than the price of an A-style mandolin, even if the sound quality is not too great. So, why do people pay so much for just decorative details?

The truth is that the decorative details are worth the extra money. The scroll points look beautiful against the plain, classic body of the F-style Mandolin.

Therefore, do not be embarrassed by paying a little extra for the F-style Mandolin’s beauty.

However, craftsmanship does play an essential role in the long term. It has significance when it comes to the playability of the instrument.

Some manufacturers, such as the Ibanez company, are making mandolins for as less as $200 with the Florentine style. These mandolins are entry-level products and are ideal for musicians who are starting out their careers.

If you are looking for a professional mandolin, another option is the Washburn F-style mandolin, which retails for around $1000. Ibanez company also gives you plenty of options to choose from that cost from $400 to $600.

When you get a new mandolin or compare two brands, you will notice that the F-style mandolins are about 50% more than the price of an A-style mandolin. But is it worth it? Let’s look into the further sections to find out.

The F-style Mandolin has ornamental scroll buttons that you will not see on the A-style Mandolin. Therefore, it produces a full-bodied sound.

This is the prime reason why the country and bluegrass genre musicians prefer the F-style Mandolin over the A-style. However, it would be best if you also considered that the A-style Mandolin has a greater resonance power.

If you come across a mandolin made of wooden materials like mahogany, the bass response will be more robust, along with richer tones and better notes and chords.

The instruments made of maple or similar materials will have a higher attack rate that offers brighter tones and a more open spectrum end. These features are applicable to both designs.

Both the A-style and F-style mandolins make use of the eight-string design, which is present along the instrument’s neck, the same as a six-strings mandolin.

The upper tuning mechanisms are also pretty similar. It mostly depends on the musician’s preference and how they like their instrument, as you can make some personalized changes.

When you scroll the F-style mandolin points, you will see some areas form a dampening sound.

This design ensures that the listener does not get lost in the upper register sounds. If you similarly play the A-style Mandolin, it will give out more bass within the chord mix.

According to most professionals, the F-style Mandolin mainly has a better sound due to its bass response. If we talk about altering the A-style mandolin design, you can get a carved or flat top.

The latter is occasionally referred to as the ‘flatiron’ design.The A-style mandolins look similar to the older Gibson models instead of the traditional models.

Therefore, they produce a brighter sound and remain consistent in their delivery and performance over time.

A versus F-Style Mandolin for Bluegrass Playing

Another confusion that arises when talking about mandolins is whether an A-body or F-body mandolin is a better choice for playing bluegrass.

According to the opinions of most users, the F-style mandolins work better for playing bluegrass.

However, you will not find much when you look for evidence of any tonal difference between the A-style and F-style Mandolin for playing bluegrass.

But since the experienced believe the F-style works better, most go for this body style.

Since it is pretty hard to change traditions, convincing anyone that both styles play almost the same tune for bluegrass will be tough.

But if your only option is to get an A-style mandolin for now due to limited budget or any other reason, do not be disheartened. Both the mandolin bodies play the bluegrass reasonably well.

What to Consider When Getting a Mandolin?

Ask yourself the following questions when buying a mandolin:

The answers to these questions are that an A-style mandolin works better for folk, Irish, and Celtic music, while the F-style is ideal for bluegrass and classical music tunes.

The A style is less expensive than the F style and can be purchased initially since the tonal differences are not too apparent.

There are two famous mandolin types- type A and F. The type-A Mandolin is simpler in design, less expensive, and better for playing Irish and Celtic music.

The F-style Mandolin is more popular among professionals, costs more, and has scroll buttons that slightly affect its sound quality and add to its aesthetic value. Most professionals believe they sound similar with slight tonal differences.

What is an A-style mandolin?

The A-style Mandolin is a musical instrument with a plain, pear-shaped body. It has no scroll points and is simpler in design than the F-style Mandolin.

What is an F-style mandolin?

The F-style Mandolin is the more popular style of Mandolin with scroll points. It is more costly than the A-style Mandolin but is widely liked by professionals.

Do A and F-style mandolins sound different?

Some musicians believe that the A and F-style mandolins sound similar, but others argue that some tonal differences suit particular genres better. 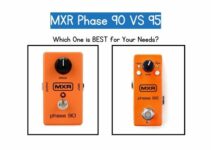 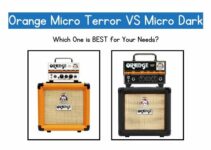 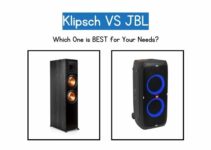